Does Your Team Work?

Many of you know that I am a voracious reader.  With that being said, I am a poor second to Don Kardux, founder and owner of Business Navigators, who envelopes books like sumptuous meals.  I am honored to spotlight him again with his monthly sharing of his favorite book of the minute!  This short report was so interesting to me that I ordered and downloaded the book immediately.

Here's what Don has to say about The Five Dysfunctions of a Team.

Almost 50 years ago Patrick Lencioni wrote a most useful and magnificent book about Leadership.


It’s in the form of a short novel. It is a leadership fable and the story of Kathryn Petersen’s struggle with the management team from hell and her final positive resolution is instructive.


The five dysfunctions are:


Of course, the Five Dysfunctions reversed, is the goal.

Because the first part of the book tells a story about the personalities of the members of the team and the difficulties Kathryn faces, it is an entertaining read. Go ahead, take a chance and download this short book for lunch!

Moving into a new market can be exciting and humbling all in the same minute!

Some of you know that I am expanding Connext Nation to the NE corner of Ohio.  I have been moving in that direction for about 7 months now.  And basically when I started I didn't know anyone in that area.

That first day, when I stood in front of the mirror and knew that I had dedicated the day to Cleveland was a little challenging to say the least.  But let me tell  you some networking lessons I've either learned or remembered. 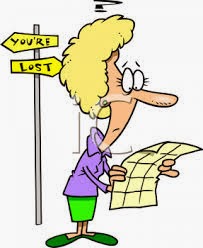 1.  I started with the people I knew in Cleveland even though it was less than five!  What this did was to ground me and also forced me to learn my way around -- or figure out how to get UNLOST!

2.  I asked those people for recommendations of other people to meet and also one networking group to join.  This has proved so helpful, because otherwise I would be cold calling people.  I also found my way to the Rocky River Chamber which is the best chamber in the whole world, as far as I'm concerned.

3.  I meet with people to find out about them and what they do in Cleveland.  Up till now, I have answered their questions briefly about what I do and then throw the conversation back their way.  Because I have a free preview at the end of this month, I now asked if they would like to come to that.

4.  Some people I have met with have not been helpful or will not be helpful even though they were delightful.  It's sort of like dating, finding the right people for longterm relationships.

5. I have received some rebuffs from my requests to meet.  That is OK, because there are so many people.  I just move on because the next person I reach out to may be the gem I have been searching for.

6. I drove to Cleveland (1 1/2 hour drive) on one very snowy day.  The word got out that I could be counted on to be there when I said I would be there.  What I remembered is that making just a little extra effort makes me stand out from the crowd in a good way.

I'm sure I have lots more lessons to learn, but so far this is my education!
Posted by Debby at 9:30 AM No comments:

Marketing to your Audience

A couple months ago I attended a presentation given by a local business person in our community.  I wanted to learn about her topic and also to support her efforts.

When I arrived, she was at the front of the room and she did acknowledge my entrance with a "hello" but she went back to being seated at a table working on her computer, with her back to the audience.  And that is the way she stayed until the beginning of her formal presentation.  Since this was a free presentation, it was a marketing effort on her behalf.

Here's my take on the marketing that happened.

The presentation was very good, this woman knows her stuff.  But, I'm not sure she realized her networking goals.  You see, connection to the audience members is so important for the marketing to succeed.

For those giving these types of talks where you are trying to gain prospects, know that your presentation begins the moment the first member of your audience walks into the room.  Be ready to greet them and then to also to carry on a conversation.  It can be small talk, "How were your roads this morning?"  Or you could ask each person if there is one thing they want to get out of the presentation.  Research has also shown that if you touch people they are more likely to connect with you.  The touch can be very fleeting, just a brush as you hand then a sheet of paper (handouts) or pen.  Or course, you can shake hands.  They won't even know it happened.


Doing the above will probably push many people out of their comfort zone, but you'll find that as you do more of it that your zone borders will enlarge!

So, what have you seen speakers do that really helped them to connect with their audience?
Posted by Debby at 9:30 AM No comments: 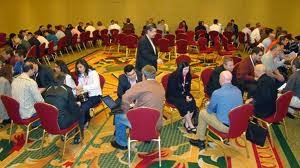 Speed-networking can be one of two things, either good or bad!  There is no in-between.

Last week I was at a Findlay Chamber Speed Networking and for the most part it was good.

Most of the participants realized that in two minutes they can't tell (or sell) everything.

One particiapant, however didn't know understand the concept of finding people to establish relationships.  She was in full sales mode.  She had a sales sheet inserted into a plastic protector and she used it as she pointed out all the benefits of using her services.  She never made eye contact, nor did she smile.  At the end she handed me (and everyone else) a big plastic bag full of more propaganda and candy and pens and pencils and.....

Others in the room understood the need to get to know who was sitting across the table from them.  They understood that while we may not be able to do business with them, that we still may be able to help them.  They conversed and smiled!  We traded business cards and maybe an announcement or one other small advertising piece.

Guess who are the ones I have scheduled appointments to get to know better?  I know you're smart, so you already know it is door #2.  The thought of sitting down with the lady from door #1 is very scary!

Speednetworking is meant to be a way to meet people and then to make a decision as to who you will meet later to discuss things more in-depth.

What's in a Name?

OK, I get it.  The name of my company, Connext Nation, may not be the easiest to pronounce at a first glance.  But really if you take the time to look at it, it is very easy. 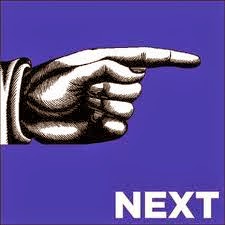 Think Connect and then put a "next" in as the last syllable.

Well I guess not!

Two times in the past couple weeks, the name has been murdered.  Not just mispronounced, but stabbed again and again.

Each time I wanted to correct the person, but  I also wanted that person to save face.

One time I was being introduced as the speaker.  Please, Please, PLEASE,
those who are introducing people, make sure you know how to pronounce both company name and their personal name.  Especially if that person is speaking gratis, they need your help with marketing.  If you give the mispronunciation then the marketing falls flat.

I have learned my lesson and now I am going to have a pronunciation guide immediately after Connext Nation in my written introduction.

Have you ever had your name or company name twisted and what did you do about it?

What Do I Need to Practice?


Here is our monthly column from our guest book reporter, Don Kardux, owner of Business Navigators.  If you'd like to send Don a comment, please send an email to Don@busnav.com.

Talent is Overrated, by Geoff Colvin

I wish I had the innate talent “the natural ability to do something better than most people can do” like Tiger Woods, Warren Buffet, Mozart or Itzhak Perlman.
If I had ‘talent’ like that I could be a ‘world class performer.'
“Wrong,” says Geoff Colvin, formally a senior editor at large for Fortune magazine.

There are other elements that Colvin believes are the real definers of ‘World Class Performance.”
In the first six chapters he defines and illustrates these elements. Scientific research coupled with delightful stories help to clarify and validate his point of view.
Chapter seven and eight focus on applying these principles in our lives and organizations.

He finishes the book looking at Innovation, Age and Passion.
In the afterword he mentions some of the effects the book has had on those who read it.
“After I presented this material in a seminar for managers, one of them experiencing a sudden epiphany, raised his hand and exclaimed, ‘I’ve got chess players, but I’m training them like musicians’ “.  (You’d have to read the book to get it)
A medical products firm applied his principles to a product roll out with their sales training approach and increased from average sales of 1.5% to a 10.5% and from an average prospect conversion rate of 25% to 95%.

This is a steak dinner and a four course read.
In short, what separate World-Class Performers from everybody else? Practice in using the elements. Practice does not make perfect. Well designed practice does!
Posted by Debby at 9:30 AM No comments: