At the WEN conference on Friday, many people had "Certified Networker" on their nametags. As a sponsor of the conference, I was able to offer discounted registrations to members of the Certified Networker community. Thirty-five people took advantage of that offer. I didn't realize that they would not have their own company name on their nametags, but really, I'm not complaining!

Chuck Kistner, Allied Flooring and Shirleen Kistner, Vintage Yarns, are both grads of the course and they registered their son, Andrew of BuilditFixit.com, for the conference using the CN discount. Andrew came up to me during the day on Friday and said, "Hey, how do I get registered for this course? Everyone is talking about it." The course is all about finding people who want to buy as opposed to going out to sell to people. What a prime example of this concept.

Scott Ginsberg, the name tag guy, encouraged us to keep a word of mouth journal in a recent post. I figure there is no better place to keep a journal than here in the blog. It won't get lost!

What is the most recent example of a word of mouth event in your business?
Posted by Debby at 8:28 AM 3 comments: 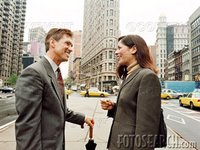 Ivan Misner, Chairman of BNI and Hazel Walker and Frank DeFraffle, both BNI directors are working on a book about men and women and the way they network. The basis for the book will be an online survey they have compiled. They hope to gain 10,000 responses. If you'd like to add your two cents to this publication you can take the 24 question quiz online. I did it and it took me just a couple minutes.

My question to you is, "Do you think men and women have different networking styles? What makes you think so?
Posted by Debby at 5:19 PM No comments:

The Annual Women's Entrepreneurial Network conference was yesterday. It was great and frustrating for me all at the same time. Great was the wonderful day put together by the conference committee. We had two inspiring keynote speakers, Scott Ginsberg, "the nametag guy" and Gail Goodman, CEO of Constant Contact. There were wonderful outbreak sessions, too. Both Scott and Gail each led such a session. In Scott's, where he talked about the Seven Habits of Highly Horrible Networkers, I think we probably broke the fire code for that room. Every seat was taken and many people sat on the floor.

Frustration for me was two-fold: 1) my camera didn't work, so I was not able to take one picture of this wonderful day and 2) I didn't get to connect with as many people as I had wanted to. I guess I just need to have a better plan for making the connections happen. I have taken care of the camera issue with the purchase today of a new Cannon SD 600. It is about the size of a 1/2 inch thick credit card. Neat!

When you go to a one day conference that is jam-packed full of people to meet, exhibitors to see, and speakers to hear, what is your secret for making it all happen for you?
Posted by Debby at 7:21 PM 3 comments:

unty Chamber of Commerce, asked me to speak at their breakfast networking meeting. One member, Marilyn, works for a staffing agency, and her job is to contact her prospects mainly by phone. She asked for some suggestions because the HR folks she needs to contact, are not interested. My comment to Marilyn was that the best way to get people to listen, is to get them to talk about what is important to them. Her comment was that what she was telling them is important. I stopped her and explained, "that's just it, if you are talking, they are not!"

Isn't that the way it is in networking. In fact, sometimes networking gets a bad name because people feel they have to control the conversation with snappy, creative remarks. Creativity works in advertising, and it can work in networking, too, if the creativity is all about how you are going to phrase the next question to keep the person talking.

Back to Marilyn's problem of trying to get the interest of the HR person. I asked Marilyn if she was allowed to attend meetings and events as part of her job. I figured I knew the answer to that question because she attended the event yesterday! I suggested that she get involved with an HR association so that she could find out what challenges the HR world is facing. She could also be an active member of the group so she can become a friend, instead of an annoying sales person on the other end of the phone line. Her initial comment was, "but that will take time out of my workday," then almost immediately she laughed and added, "but for all I'm realizing from making cold calls 8 hours a day, it probably would be a much better use of some of that time."

What are you doing to spin your wheels at work? What could you do to gain some traction?
Posted by Debby at 8:22 AM No comments: 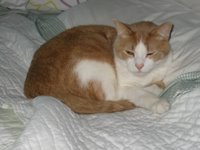 I am pretty sad tonight. Max died today. Max is one of our cats that we had taken in about five years ago. He got along just fine until just recently when he started using the furniture as his litterbox. The vet said there was nothing wrong with him and I had had enough, so I decided that he would become an outside cat, living in the barn/garage at night. We live on 13 acres, but Max stayed close to the large back deck. Steve, my husband, kept threatening to take him to the no-kill pound, but it was full. I didn't really want that, because he would probably not be very happy living there.

This afternoon, our three dogs ganged up on him and killed him. I am really mad. Luckily, I was away and didn't have to see this destruction. Steve was mowing and couldn't get there in time to save him. These same dogs knew Max inside the house, but evidently he was not brave enough to put them in their place and ran from them. A fatal mistake. I feel awful that I put him at risk. He is now buried out in the pet cemetary out in the back forty along with Ginny, Dillon, Jake, Max and a few others. Steve is out in the barn with the dogs. He knows that it is not the night to let those mean animals in the house.

In the Friday morning Certified Networker class, we addressed the topic of target market in order to help the students realize the benefit of clearly stating what type of business they are looking for. In doing so they help others to give them the referrals that each student really wants.

Nicolaidis, a representative for the women's clothing line Ectetera, had one

of those lightbulb moments about halfway through class. She said, "I get it! It is just like me having a giant jar of buttons, and telling everyone I need a button. Then I get frustrated because I didn't want just any button, but I actually wanted a blue button. And then when I get all kinds of blue buttons, I can't figure it out, because really I just want blue buttons with only two holes."

In the four years we have been teaching this course in NW Ohio, that is the best explanation of target market that we've heard yet. I plan to use a jar of buttons from this point forward, when we are delivering that lesson. It is a visual that certainly paints the picture. Thank you, Cheryl. That's why I tell everyone, that even though I have been through this course over 40 times, each time I learn something new or understand a nuance that I didn't before.

What story can you tell to describe an abstract concept?
Posted by Debby at 12:04 PM 3 comments: