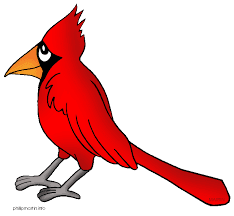 I have this beautiful and annoying Cardinal outside my window.  His gorgeous plumage is nice to see this time of year when everything is still brown in Ohio, but there is a downside.  He sees himself reflected in our windows and thinks that another bird is invading his territory. Hence he spends a good part of his day attacking that gosh darn bird.  A very imaginary threat.

Sometimes we humans act the same way.  We see or hear someone that resembles us in what we do and we get our feather ruffled because of this imagined threat.  We  try to scare that  person away with our antics.  But like the window, it is probably not an effective strategy!

If I could only talk to the bird, I would tell him, "Hey Red, you're going to knock yourself out hitting the glass.  Then there will be a real threat, because "Kitty" might be lurking around the corner."

Or if Kitty is inside, the wild coyote might be sneaking around the yard.  A red bird would be a nice lunch for either.

It's the same thing with us humans.  When we pay attention to stuff that doesn't matter, we miss other opportunities that may be even bigger and more profitable.

So are you hitting the window?  If so, how is that working for you?