Life is a Surprise 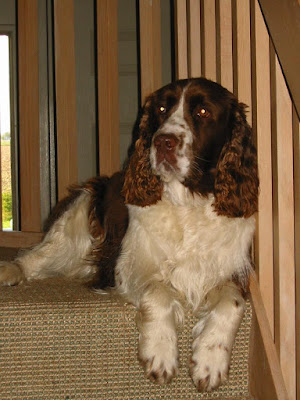 I would never have guessed that our almost 16 year old dog would outlive one of the younger ones, but that is how it went down today.
Dillion II, our Springer Spaniel, died today around 2 PM. He was 11 years old. He had been in constant pain for about a week and we made the decision over the weekend. We know that it was the right decision because he was so incredibly unhappy and
sick.

We will remember all the good stuff about this dog: the fact that he would sit in front of Steve staring at him in devotion; or that if Steve was in the ha

mmock, there should be room for Dillion, too; or that Dillion also liked to ride in the kayak trying to kiss me right on the lips when both of my hands were busy paddling. He liked to play Frisbee, bu

t he never picked it up, instead giving way to his elder, Gable. We got Dillion and his brother, Owen, to replace Steve's first Dillion. We think that the day we put Dillion I down is the day the new Dillion was born.

It is quiet around here tonight, but it is better not to hear Dillion moaning. I'm sure he is happier.
Posted by Debby at 6:55 PM 1 comment:

Tom Fishburne has done it again.

While his cartoon below is actually about the lack of innovation in product design, it also demonstrates the concept of having too broad of a target market. 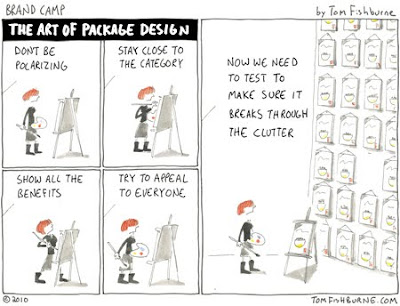 To network effectively, business people must narrow their focus. You can't be everything to everyone nor can you be everywhere all the time!

Also, without become an expert for some segment, you look exactly like all the other people who are selling what you sell. It makes it difficult for your consumer (customer) to decide why they should buy from you rather than just blindly picking "off the shelf." Also, you have to be a gerbil on the wheel trying to network where everyone is rather than selectively picking out the right places to be.

What's your take on this?
Posted by Debby at 8:22 AM No comments:

Does Your Dealership Speak YOUR Language?

Last week at the International Networking Day event in Pittsburgh, I met Anne Fleming, the dynamic owner of Women-Drivers.com. This is a website that among other things, rates dealerships as to how friendly they are to women.

The website is just chock full of fun stuff and information. There is a test you can take to find out you

r negotiating personality. I am a Bold Babe! It says I like colorful clothing and probably the same in cars. Surprise, surprise -- my YELLOW Mini is a fav of mine!

There's also His and Her car reviews for the same car. They cracked me up because of what was important to the guy as opposed to what was mentioned in the gal review.

Check out this site and if you've visited a dealership recently, go ahead and perform a review.
Posted by Debby at 3:38 PM 2 comments:

A few days ago I was preparing for a sales seminar that I am delivering this week. I rarely teach about sales these days, preferring to focus on word-of-mouth marketing, but this is a favor for my friend John Bauer, Director of the Bluffton Center for Entrepreneurs.

One aspect of the training will focus on the act of information gathering. The same day I worked on this presentation, I also introduced one of my networ

king contacts to another. I smiled to myself when I realized how the two (networking and selling) are very alike.

You see, back when I was a sales manager, I accompanied my sales staff to their appointments sometimes. We had an acronym that we used to help us to remember to ask the right questions. What I found with new sales people was that they would quickly stop asking questions and start SELLING the second they had gathered a piece of information that meant they could be of

benefit to the prospect.

What happened as a result is that many times the prospect shut up entirely and got defensive. All of a sudden, instead of being asked all about their wants and needs, they were having to think quickly to deflect the hard sell.

In networking appointments the same can happen. If two people are being introduced by a third, it is better to let that third person do complete introductions and pro

motion before even opening your mouth! First of all, if you start to talk to early, you may miss an important piece of information and secondly, the introducer won't get to brag about you as much as possible.

So no matter whether you are selling or networking,

The calluses you develop will pay off in the long run!
Posted by Debby at 2:56 PM No comments: