When You Miss the Bull's Eye

What does targeting a market and networking have in common?

It is always so interesting to me when someone tells me that target market concept doesn't work for them. Usually, when I ask to hear what they have chosen as a target market it sounds so 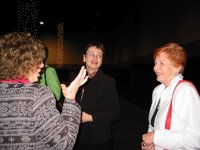 mething like this, "I want to do business with small to medium sized businesses with 5 - 20 employees." Or it might sound like this, "The market I'd like to focus on is middle aged women between the ages of 35 - 65." While the two above examples are a good start, by no means are they a narrow enough target for those with limited marketing budgets. In fact in my opinion, the smaller the budget, the smaller the target should be. That way those marketing dollars will give the best bang for their buck.

But back to networking. When someone says that target marketing doesn't work for them, one question I ask is, "What professional association have you joined to help you either rub elbows with your targets or to get acquainted with people who can introduce you to you to your targets? 99 times out of 100, the answer is silence. Or they attended once and didn't get any business so they didn't go again.

This is where networking comes in.

If done right networking is relationship building. Attending and giving of yourself to a group will give the members of that group the feeling that you belong. This is long term investment. And that is the reason many say, "target markets don't work for me." They have not put in th

e time, nor chosen a narrow enough target to even figure out what the professional association is of that particular group. These people go back to being jack of all trades, master of none.

Tom Stanley's Networking with Millionaires CD album clearly shows how it doesn't matter what market you choose to focus, but it matters that you choose.

What has your experience been with finding a narrow target and where do you network to specifically find those people?
Posted by Debby at 7:33 AM 1 comment: 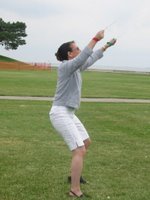 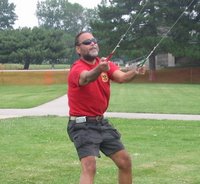 This past weekend four of us flew a kite at Put-n-Bay, on South Bass Island, OH. Many people think of this little town more for partying, particularly at the Roundhouse Saloon, but there is lots more to do. The wind was quite strong and you can see from the pictures that a good firm stance was needed if you didn't want to go flying off over the bay!

We had a blast. Steve, my hubby, taught us to stall the kite enough to touch down, rest for a second on edge and then flip it back into the 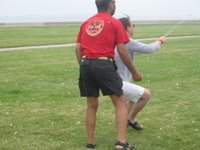 air. Well, at least we got the touch down part right.

As I watched Steve, Greg (my son), and Lisa (my daughter-in-law) fly the kite, I also glanced around and saw people stopping to watch. One couple stayed for a long time and finally she came up and began asking questions about the kite and where to buy such toys. As we were chatting with this complete stranger, it occurred to me that we had found as Scott Ginsberg puts it, another front porch. When you are sitting on your front porch, people stop by to chat for awhile

What interesting ways have you found that invite people to talk to you?
Posted by Debby at 9:33 AM No comments:

I am always amazed when people don't remember or know an important rule of networking -- the one that says, "the person who invites, is the one who picks up the check." Now this is not one of the Ten Commandments of Networking a Mixer that Dr. Ivan Misner, Chairman of BNI, talks about, but it is probably should be the 11th commandment.

I happened to be at a networking event this week where I had volunteered to be at the registration table to take money. It is a great place to be because I got to greet every member and visitor. A very nice lady came to the table and related that she was the guest of a member. The member had not arrived yet, so we introduced her to one of the welcome committee members knowing that they would make her feel right at home.

The inviting member arrived after the lunch started. I asked if this member would be paying for the guest, too. The reply was, "No, I don't really know her that well." In addition, this member needed to be introduced to the guest. Now I have invited plenty of people who I've never met in person to events , but I sure try to be at the event when they arrive. After I introduced the two, I thought to myself that with this attitude the member would never get to know this guest very well. The member does not seem to have a welcoming open attitude.

What are your thoughts, either from the member's or the guest's point of view?
Posted by Debby at 5:07 PM 6 comments:

Today I met with a member of my BNI chapter, Arrow Dickerson, an Allstate insurance agent. (No, she does not have a twin brother named Beau!) We talked about the types of referrals that are passed within our group. She being a fairly new member to BNI, wondered if the only type of referrals that would be developed would be those between members. I explained that when a member is new, the other members try them out personally first, before referring them to friends, clients or family.

Networking and relationship development can be such a mystery. There are people out there who think meeting someone the first time gives them the priviledge to sell to that person immediately. BNI has it right in suggesting that members meet outside the normal weekly meeting to get to know each other better. This morning I found out that not only has this young woman been in the insurance business for 25 years, but she won the top award available to those who are not agents. Her mother was a claims adjuster and step-father an agent. Gosh, it must run in her blood. She recently bought the agency, and now she gives both coverage and comfort. What more could you ask for from your insurance agent?

Who have you been impressed with recently when you took the time to get to know them better?
Posted by Debby at 8:31 PM No comments:

Contained in the list of "things" to write about, is the topic of "What Makes Women Seem Confident?" Several people have asked me to write about this and I am interested in the subject because many people tell me that they are intimidated by me before they get to know me. Yikes! That sure is the opposite of the message I want to send and it is always a surprise to me when I hear that comment.

I figure this is all tied up in body language -- the silent words that deliver more than I ever want to divulge. Knowing a little about this part of the sales world, I'm thinkin' that it probably has to do with length of eye contact, calmness of voice, pacing of verbal delivery, erectness of body and a trillion other things.

I have my father to thank for my shoulders back posture. One day as a third grader I must have been slouching and he told me that it was important in life to put my shoulders back. I have Toastmasters International - Westgate Club to thank for my confident presentation skills. But what is it that I am doing that makes people intimidated? Looking at the line up below, which of the women appear most confident? What makes you think so? 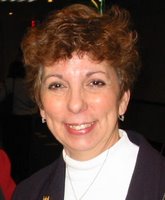 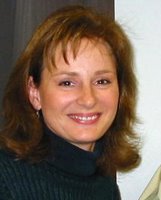 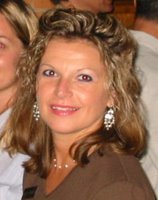 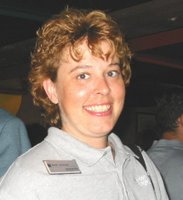 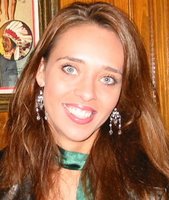 What comments do you get about the way others see you? Is it a surprise?
Posted by Debby at 4:36 PM 6 comments:

House Full of Relatives is Like a Giant Networking Event

Whew! All is quiet on the Peters/Cotner front. This past weekend we had 15 people including Steve and me at our house to celebrate summer and an early 4th of July. After everyone left on Sunday afternoon, I realized how much this had been like a giant networking event and how I did not prepare for such an event.

Oh, don't get me wrong. The house was somewhat clean -- or as clean as it can be with three dogs and three cats. 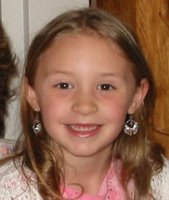 There was plenty of food -- actually more than enough for a week. 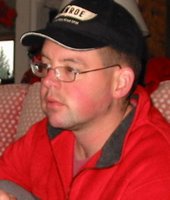 There were even some fireworks -- my son, Andy, has always been a pyro-maniac.

We swam in the pond and played with the canoe and kayak. Part of the fun was called "sink the canoe."

What I didn't prepare for was a method to continue to get to know these relatives better. I know all the tricks -- set a goal, use open-ended questions, find out commonality, and even what they are hoping to accomplish. And if I were heading out for a Chamber business networking event, I would certainly have at least thought about all this. Probably this whole gang won't all get together here until our annual Greek/Polish/Japanese/American Christmas. I hope that I find out stuff then that I didn't this past weekend.

What did you do this past weekend? In the future will you change what you did?
Posted by Debby at 8:04 PM No comments: