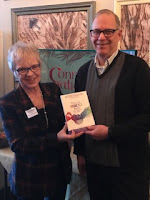 The other day I was meeting with a young woman, Hannah Fitzgerald, who now that she had completed her online degree was re-focusing on her website development business, Marvelous Web Media. She asked me about my book, Tell Me Exactly What to Say, as she wanted to know what it was about.  I told her that it is 33 networking conversations and that it had gotten started because one of my students, Rick Adkins, Oasis Senior Advisors, had asked how to introduce two people to each other.  Hannah, exclaimed, "I just found out not too long ago, that I need to say more about two people when I'm introducing them.  Always before I just said their names and then there was an awkward silence!"

I shared that yes, she could describe each one to the other using tidbits that she knows about them to spark the conversation.  Also, I shared that she is the host of this "event" and as such, she needs to let the two talk, but that if something important was not being mentioned, she could interject that fact.  At the end, she could again enter the conversation to summarize and encourage the next step these two people could take.

Hannah, stopped our conversation for a few seconds while she was obviously in thought.  Then she said, "I get it!  Networking has to be intentional!"

And that certainly sums it all.  If you just fly by the seat of your pants, networking will be fun, but if instead you have a plan of action, you will gain the results you want.
Posted by Debby at 11:43 AM No comments:

What to Say to the Event Organizer

In my new book, Tell Me Exactly What to Say,  one of the chapters is about how to introduce yourself to the person who organized the event you are attending.  The title of that person might be Executive Director or event chair.  It doesn't matter what the title is, it does matter that you realize how important that person can be to you.  Just think about it.  He or she knows everyone!  And if you have a connection, that could lead you to great new acquaintances.

One warning!  Don't brother that person when she is in the midst of craziness.  If she looks harried and stressed, you won't be remembered or worse, you will be remembered as the person who took her time when she didn't have any!

That chapter is on page 47 of the book.   Kristin Meyer, Executive Director for the Ohio-based, Maumee Chamber of Commerce, mentioned at a book ribbon-cutting, that she wished the 5 people who kept her from starting the "sit-down" portion of the lunch on time that day had read the chapter!

What are your thoughts on this?
Posted by Debby at 10:15 AM No comments: