Vacations do get in the way of schedules. With that being said, this book report from our resident reviewer is slightly late due to Don's well-deserved vacation in Cocoa Beach, Florida.  Also, I delayed in getting in published because of pressing deadlines at my end. But this book looks like it should be a must read for everyone, so jump in!

Roy Hauser is a good friend and a client of Business Navigators for a little more than two years. Roy and his son Josh have created a culture for Hauser Air in Westchester, Ohio that is outstanding and one of many reasons they were chosen to receive the Consumers Choice award for 2014 as the best HVAC company in Cincinnati.
So, when Roy recommended I read "It's My Company Too!" I didn't hesitate.
I'm glad I did.

Currently, we use five books to help management teams improve their skills.
"The Managers Coaching Handbook" reviewed in February of 2013.
"The Five Dysfunctions of a Team" reviewed  in April of 2014.
"First Break All The Rules " reviewed in April of 2015.
"Now, Discover Your Strengths" reviewed in May 2015.
"Good To Great" not reviewed.
I'm strongly considering adding "It's My Company Too!" as the sixth tool to help managers and companies become better.
It's that good.
The authors, Kenneth R. Thompson, Ramon L. Benedetto , Thomas J. Walter and Molly Meyer have created a capstone for many of the ideas identified in the preceding  five books.
Like Jim Collins, who wrote, "Good To Great" the authors selected eight companies to analyze.
Each company represents  an approach to  culture which results not only in employees (Team Members) to be 'engaged'  but the next step wonderfully 'entangled' in the company  culture. 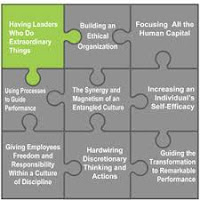 The following diagram is a great summary of the divisions of the book but also of the approach. The eight pieces of the puzzle which comprise the perimeter are held together by the center piece which is the final chapter in this excellent book

It's my habit when I read a great book to put asterisks at the top corners of pages that have underlined or circled content.
Those are my "AHA'S" , moments of intense revelations.
In "It's My Company Too!"  I've identified 57 pages, many with multiple AHA'S.
There are too many to summarize.
Your really need to read this book.
The following is from the introduction.
Steven caught the mistake, then turned to the offender and yelled, "Hey, stupid, I told you to put that in the Indiana truck. What is the matter with you? How dumb can you be?" An immediate hush fell over the warehouse . Hugo Rios-Tellez a young, full-time culinary worker, overheard the outburst. Silently, he left what he was doing and approached the supervisor. "Hey, Steven, number two,"  was all he said as he pointed to a poster on the wall and directed the supervisor's attention to the list of company values. Steven turned and looked at the placard hanging just above the freezers, where he would find "Number Two: Treat all with respect."
Staring at Hugo, Steven took a second to regain his composure, realizing he had just violated the company values, something he knows was wrong. In response, he sought out the novice and immediately apologized for his outburst. What those present didn't know was that Tom Walter, Tasty Catering's CEO was in the rear of the warehouse and had witnessed the entire episode. He silently caught up to Hugo and shook his hand placing a $20 bill in it as he said, "Thank you, Hugo." Hugo looked down at his hand then back at Tom. He handed the bill back and said, "Thomas, it's my company too."
Posted by Debby at 9:21 AM 1 comment: 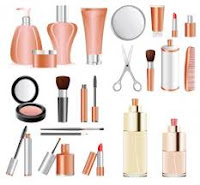 So I was meeting with a women to get to know her and her business better.  Let's call her Susie.  During the conversation I invited Susie to a lunch that I host every other month with women who I've met that need to meet each other for various reasons.  As I was describing the people who had attended, Susie piped up and said, "Oh, I have several thousand dollars worth of make-up and skin care products that I would like to donate to one of the lunchers that I had described.  We'll call this new  person Linda.  I told Susie that I would call Linda to let her know of this generous offer.

So here's how the phone call went.

Linda was delighted and said, "Oh I know Susie.  Her daughter and my daughter play soccer together.  Yes, I would like to talk with Susie about her offer and I've been meaning to call her anyway, because I have need of her services next week."

In a later email that I received from Susie, she said, "Thank you for connecting us.  Yes, I know Linda, but I don't think I knew her last name and for sure, I didn't know what she does for work."

The point of this story is two-fold.

1.  As a connector, you can make a huge difference in people lives if you just listen to what they need!

2.  Do your friends and acquaintance know what you do?