What Would You Ask?

Not to long ago I sat with a women, we'll call her Susan, at a breakfast and when she found out what I did (helping people to get more referrals) she shared that even though she's been in her business for many years, she hasn't had much luck in getting referrals.  Susan said, "I ask my clients if they can refer when we're done with the project, but then I move on and they forget that I ever asked.  So nothing ever comes of it."  She asked if I had some input.

Susan's prospects happen to be CEO's of fairly large companies.  I asked her what else those CEO's buy or what other types of resources they link to.  Susan paused, fork in mid air and after several long seconds said, "I don't know."  So I of course asked her how she thought she could find out.  Again a long pause.  Again a repeat of the "I don't know" answer.  I then posed another question, "What about asking your CEO clients who they buy from?"  She turned and looked at me with that, "duh" look on her face that we've all had at some point when the obvious finally strikes.

As the referral/networking guru, I can explain this concept further and will in a future post.  This post however is about the act of asking someone else for help.  Sometimes just a word or short phrase that someone else provides makes all the 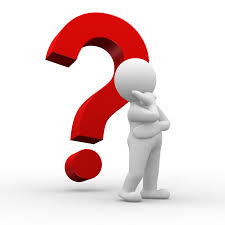 difference in the world.

My phrase that changed my life didn't happen as a result of a direct question from me, but input that gradually happened over many months.  I worked with a gentleman named John Steele back in the early '80s.  John took me under his wing even  though he wasn't paid to do so.  At one point John said to me, "Debby, you're good, you're damn good."  Those six words changed my life.  They allowed me to believe in myself.  My career success accelerated from the moment forward.  John was smart enough to anticipate my question before I even had to ask it.  But if I had asked, it would have been, "What will make me feel successful?"

So my question to you is, "What question have you asked that when answered gave you clarity on exactly what you needed to do next?"
Posted by Debby at 9:37 AM No comments: