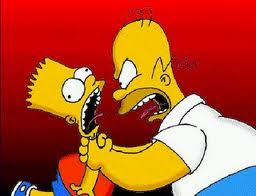 Finally, we got some snow and it is a Saturday! Yay!

I know many of you probably want to strangle me for this glee, but I spent my growing up years playing outside all day, all year long in Western NY. That meant playing in the snow drifts and having a ball. So there!

Anyway, I strapped on the cross-country skis this AM for the little tour of the back ten! It was pretty quiet out there and I didn't see any animals, but I did see lots of tracks. It was fun trying to create a story for each set or marks.

"Oh dear, did all the mess of tracks mean that there are a fight for ones life? Don't know."

"Oh dear, did the two sets of tracks represent a rabbit with a coyote in pursuit? Don't know."

Then I got to thinking. What if all these tracks represented networkers? Was the muddle of tracks a 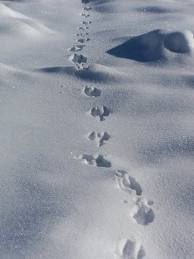 picture of one networker over powering another with their sales pitch? Or was the larger set of tracks following the smaller representing, someone stalking another business person. And did the third set represent networkers having a lot of fun, but not really being strategic about their time spent.

You can see why my friends think I should not be let out alone very often!

That said, what would your networking tracks look like?
Posted by Debby at 2:31 PM